Why do Germans prefer Barcelona to live and work abroad? 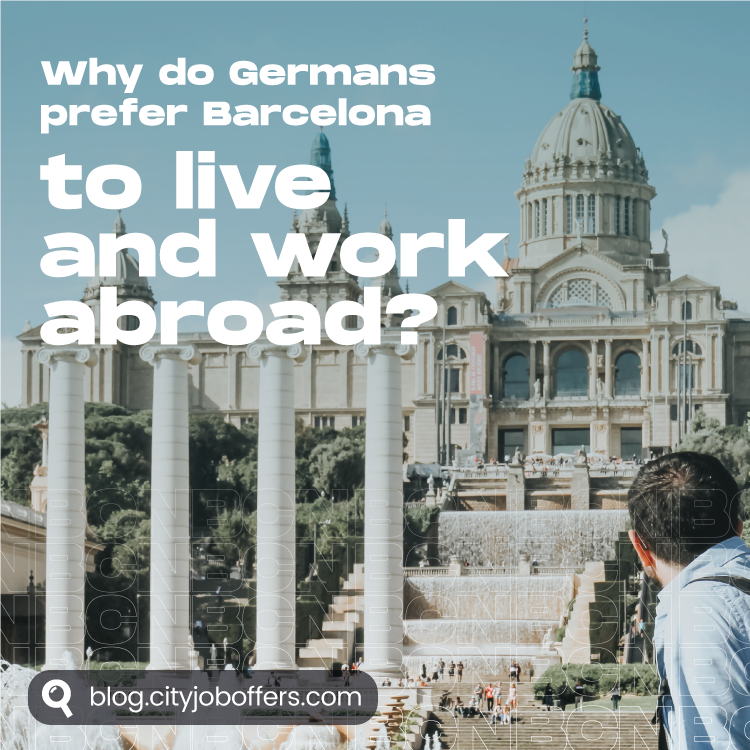 27 Nov Why do Germans prefer Barcelona to live and work abroad?

Posted at 12:34h in Find a Job by City Job Offers 0 Comments

Why is Barcelona a popular destination for Germans to work overseas?

Germans are adventurous travelers that move around the world to find their dream job and lifestyle. According to German government statistics, more than 250,000 Germans emigrate each year (the Federal Statistical Office reports that 270.294 Germans left the country in 2019). The majority of Germans move abroad for professional reasons. But, where do they move in Europe? If we do not consider german-speaking countries, Spain is in the top 3 (with the United Kingdom as the major destination), according to the Organization for Economic Cooperation and Development (OECD) surveys.

It’s warmer, it offers a cheaper cost of living and has delicious (and healthy) food. Spain and Germany have an unbreakable love story, with Germans holidaying and retiring on the sunny country for decades. However, nowadays, employment is the major reason for moving abroad from Germany. This is the result of the German Emigration study that was presented by the Federal Institute for Population Research in Berlin.

58% of German expats cited their own profession as the reason for moving overseas. The second most frequently given motive was the lifestyle in the target country. For both graduates and low-skilled workers, the relocation was particularly worthwhile, they said.

In the same survey, the graph Where the Germans Emigrate: Most popular target countries shows the number of Germans who have moved abroad over the past 10 years, and to which countries. Spain, with almost 64.000 having moved there since 2009, is ahead of France.

You do not need to be proficient in Spanish to find a job in Spain, you can easily get a job in your native language with us! Apply to our Job Offers in Barcelona for German-speakers.

Barcelona is where Germans moved abroad

Spain ranks as the favourite place in Europe for expats searching to enjoy life (and second overall the countries in the world just behind New Zealand) in The Expat Explorer Survey that a famous bank published a few years ago. Over 70% of expats in the study concluded they love immersing themselves in the culture of Spain, where making friends is something that happens naturally, as socializing with locals is not difficult.

There is one city that Germans seem to really like: Barcelona. It all started with the Olympics Games which spread the word among Germans. The success of Barcelona ’92, both at organizational and athletics levels, pulled the image of the city and showed off Barcelona’s world-status. It is not only an attraction for sun-starved Germans. Why do they prefer Barcelona to live and work abroad? We give you 7 reasons why getting a German-speaking Job in Barcelona can be the best for your career and quality of life.

– A delicious mix of the Mediterranean Sea with constant sunlight offers a comfortable climate. During winter time, the average temperature is around 17ºC and hardly ever goes below 5ºC.

– The coastal side displays central beaches that are a great place to chill and play water or sand sports.

– The relaxing atmosphere.Thanks to its laid-back spirit, living in Barcelona you can choose to maintain a work-life balance and avoid stress.

– The quality of food. Fresh fish and seafood. Fruit and vegetables are grown locally. Meat is excellent, with organic farms in Girona, Pyrenees and Alt Penedès. While prices are lower compared to that in Central and Northern Europe.

– Cosmopolitan flair with touches of eclecticism and innovation mindset. It stands out that almost half of the residents of Barcelona were born outside the city (49.9%).

– Professional advantages: in highly specialized fields, German candidates hardly find competition. They can also work in their native language, for global companies and fast-growing startups based in Barcelona calling for German-speakers. Career progression. Opening a small business is cheaper, which can be great for freelancers and independent professionals.

At our e-recruitment agency, most popular types of job offers for German-speakers are in Technical Support, Customer Service, Sales, Social Media, UX Design, Project Management and Human Resources. We work with partners in all industries, such as IT, health, banking, entertainment, aviation, tourism, sports, music and beauty sectors.

Global companies and fast-growing start-ups are hiring in Barcelona, primarily in IT. This job opportunities have grown a lot in the last year, as many industries turned digital and they are sourcing new staff with technical know-how and German skills that local candidates cannot always cover. There is when our recruiters need to look for native German-speakers living in Barcelona willing to join multicultural teams.

If you believe that getting a German-speaking Job in Barcelona is what you need, you are right! Did you know that before the Coronavirus Barcelona was breaking records? In 2019 the city improved its indicators about economy, tourism, commercial activity, use of public transport and culture.

According to the 2019 survey of Instituto de Estadística de Cataluña, in Barcelona there are more than 25.680 citizens from Germany with residence cards. It is confirmed by the register of January 2019 that the foreign population drives the population growth of Barcelona. Last year marked the highest number of foreign residents since 1991. An increase that is not caused by the natural growth of the population, which last year was negative (deaths exceed births), but by migratory flows, resulting in a more diverse and international population of Barcelona.

We are based in Barcelona because it has it all for companies, investors, businesses, and new qualified talent as you. If you are looking for jobs in Barcelona for germans, you are in the right place. We have plenty of jobs in Spain for germans! Send your CV and get yours.

This blog is written with German #cityjobbers in mind. Hope here you will find everything you want to ask about jobs in Barcelona for German speakers. As a member of our community, you stay tuned to our latest job offers in Barcelona for German-speakers as well as career advice, news of the job industry, tips to boost your CV, upcoming events in Barcelona and testimonies on how it is living and working in sunny Barcelona with your language skills for a top company. 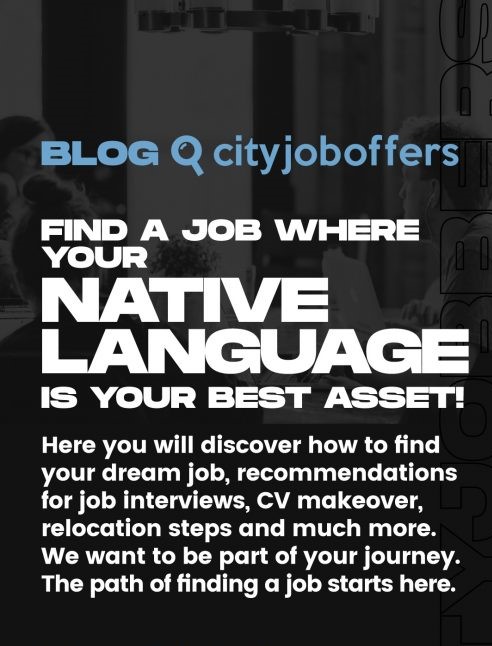 Hugging tops the list of the many things we miss f

Do you want to find your dream job this year despi

Do you like interacting with people remotely and y

The festive Xmas cheer is over, you might have spe

If you are a #cityjobber living in Barcelona, make

Do you love onboard magazines and you are looking

If you are passionate about traveling and you have

If your New Year's resolution is to get your ***dr

Have you heard about #NoInterruptionsDay? ♻️

Are you passionate about the web and love to share

One of the greatest gifts for an e-recruitment age

We are always looking for Talent interested in working within different positions in Barcelona, Valencia, Lisbon and Athens. 🔎Are you looking for new challenges

Does your Resume currently include any hyperlinks?

📑 What's the right way to include links on your Resume?

👁 Read here some advice and present the best image of you.